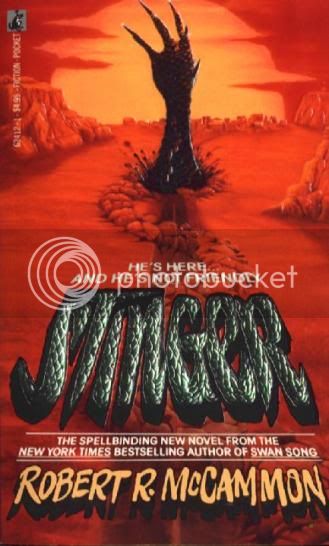 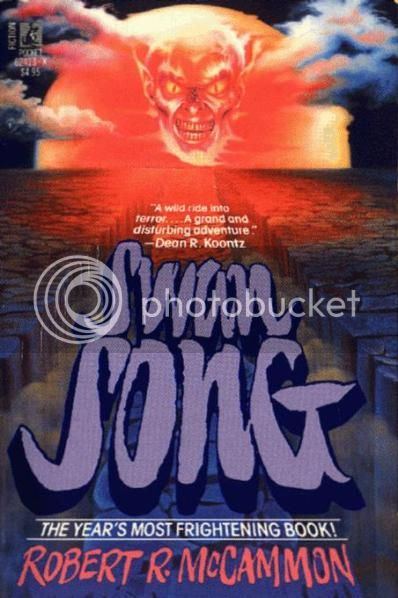 "In a future world born of nuclear rage, an ancient evil as old as time roams a devastated, nightmare wilderness. He is the Man with the Scarlet Eye, the Man of Many Faces, gathering under his power the forces of human greed and madness. He is searching for a child who has the gift of life, a child named Swan, the child who must be destroyed...
In a wasteland born of nuclear rage, in a world of mutant animals and marauding armies, the last people on earth are now the first. Three bands of survivors journey toward destiny---drawn into the final struggle between annihilation and life!"

"According to the poll... Their favortie novel was a paperback original called Sawn Song. It's a horror novel by a man named Robert Mccammon. We can't keep it in stock, Sam. They read each new copy to rags in weeks. I had a cpoy put in Vinabind, but of course, it was stolen. By one of the bad children."

"Speaks the Nightbird" by Robert McCammon
(Book 1 in the "Matthew Corbett Series")
www.amazon.com

A trial for witchcraft proves the tip of an iceberg of intrigues in this absorbing historical mystery, the first newly published novel in 10 years from McCammon (the book was written in the mid-'90s), a bestseller in the 1980s with such supernatural novels in the Stephen King tradition as Usher's Passing and Baal. Set in 1699 in Fount Royal, a coastal settlement in the colonial Carolinas, this latest unfolds the adventures of magistrate Isaac Woodward and his assistant, Matthew Corbett, who have been summoned to the struggling town to adjudicate in the trial of Rachel Howarth, a young widow accused of deviltry that is blamed for murders, wretched weather and other calamities driving settlers away. Though town leaders press for swift execution, Matthew is persuaded by Rachel's dignity and fortitude that she's innocent. Using skills honed living by his wits as an orphaned child, he pursues inconsistencies in testimony and throwaway clues and uncovers an elaborate plot involving pirate booty, animal magnetism and deadly deceit at the highest levels of town organization. This robust tale is as historically detailed as it is long, and its recreation of an era where superstition held its own with enlightenment is among its strongest achievements. Anachronisms, improbably fortuitous coincidences and private dramas that make Fount Royal seem a pre-Revolutionary Peyton Place lard the plot, but Matthew's race against time to save Rachel with the rudimentary tools to hand makes a compulsively readable yarn. McCammon's loyal fans will find his resurfacing reason to rejoice. (Sept.) Forecast: Those who enjoyed the author's last three novels (Mine; Boy's Life; Gone South), studies of the human condition that transcended genre labeling, will snap this one up, too. But McCammon also lost readers with these novels because in them he turned away from the horror themes that made his reputation. This latest could well gain him new fans, but it won't win back any horror readers.

"The Queen of Bedlam" by Robert McCammon
(Book 2 in the "Matthew Corbett Series")
www.amazon.com

Set in Manhattan in 1703, this spellbinding sequel to Speaks the Nightbird (2002) from bestseller McCammon finds Matthew Corbett, a 23-year-old magistrate's clerk, on the trail of the Masker, a killer who stalks prominent businessmen. Matthew stumbles on the bodies of two of the Masker's victims, including pederast Eben Ausley, the headmaster of the orphanage Matthew once reluctantly called home. Plucky Matthew, who becomes a junior associate of the New York branch of a London problem-solving firm called the Herrald Agency, discovers a possible link to the crimes in the person of an elderly amnesiac patient in a mental asylum who's known as the Queen of Bedlam. Matthew and his cohorts later make a dangerous foray to the headquarters that the villainous Professor Fell maintains for young-criminals-in-training. McCammon brilliantly captures colonial New York and closes with a tantalizing cliffhanger that suggests more exciting sleuthing to come.

Murder and ghoulish mayhem are the order of the day in bestseller McCammon's colorful third thriller featuring problem-solver Matthew Corbett and his escapades in early 18th-century America. After confronting a criminal mastermind in The Queen of Bedlam (2007), Matthew finds himself a celebrity whose exploits have become sensational fodder for colonial tabloids. This heady attention contributes to a bad lapse of judgment when he and his senior associate, Hudson Greathouse, accidentally allow a brutal murderer, Tyranthus Slaughter, to give them the slip while they transport him to prison in Philadelphia. The rousing narrative details Matthew's dogged pursuit of the indestructible Tyranthus as the killer cuts a bloody swath through the Pennsylvania wilderness. McCammon shows a sure hand balancing scenes of Matthew's quiet contemplation with the cold-blooded carnage that makes his quarry's name so appropriate.

"We will travel, you and I, across a tortured land where hope struggles to grow like seed in a drought. In this land, a place with no boundaries, we'll run the freeways and back roads and we'll listen to the song of the wheels and peer into windows at lives that might be our own, if we lived in that land." So Robert McCammon introduces this superb collection of 13 stories, nominated for a 1990 Bram Stoker Award for Best Story Collection. The standouts are "Blue World" (a richly imagined novella about a priest facing temptation); "Nightcrawlers" (a World Fantasy Award-winner about a Vietnam vet in a roadside diner); "Night Calls the Green Falcon" (has-been fictional hero dons his old costume to fight real evil); "Yellowjacket Summer" (fateful stop for gas in backwoods Georgia); and "Pin" (dare you to read that one). All of the stories are excellent.


Just when I think I know about all of the international editions of Robert McCammon's novels, I find new ones. I just discovered that MINE, Stinger, and Mystery Walk were published in Bulgaria in the 1990s. Thanks to a Bulgarian reader who posted scans of the covers on a Bulgarian message board, I've added these books to the Book Cover Gallery. The Mystery Walk cover is most interesting, as they took the cover of the Pocket Books edition of They Thirst and replaced the vampire....

"The Five" by Robert McCammon
www.amazon.com

Subterranean Press is proud to present Robert McCammon's first contemporary novel in nearly two decades, a tale of the hunt and unlikely survival, of the life and soul, set against a supernatural backbeat. Robert McCammon, author of the popular Matthew Corbett historical thrillers (Speaks the Nightbird, Mister Slaughter), now gives us something new and completely unexpected: The Five, a contemporary novel as vivid, timely, and compelling as anything he has written to date.
The Five tells the story of an eponymous rock band struggling to survive on the margins of the music business. As they move through the American Southwest on what might be their final tour together, the band members come to the attention of a damaged Iraq war veteran, and their lives are changed forever.
The narrative that follows is a riveting account of violence, terror, and pursuit set against a credible, immensely detailed rock and roll backdrop. It is also a moving meditation on loyalty and friendship, on the nature and importance of families those we are born into and those we create for ourselves and on the redemptive power of the creative spirit. Written with wit, elegance, and passionate conviction, The Five lays claim to new imaginative territory, and reaffirms McCammon's position as one of the finest, most unpredictable storytellers of our time.

Метеорит
Guardian Of The Beams

"The Hunter From the Woods" by Robert R. McCammon
www.amazon.com

The Hunter from the Woods marks the much-anticipated return of Michael Gallatin, the lycanthropic hero of Robert McCammon s 1989 classic, The Wolf s Hour. These all-new, interlinked stories offer a full measure of McCammon s trademark narrative excitement, and comprise a fascinating composite portrait of a unique fictional creation.

The volume opens with a pair of brief glimpses into Michael s early life in Russia and his initial recruitment into the British Secret Service. It ends with a haunting vision of the werewolf at twilight. In between, McCammon gives us three stellar novellas depicting different phases of Michael s long, brutal war against Nazi Germany. 'Sea Chase' is a nautical tale about the hazards of transporting a defecting German scientist to a place of sanctuary in England. 'The Wolf and the Eagle' is the account of an unlikely friendship between rival 'men of action' and a harrowing portrayal of a lethal forced march through the North African desert. 'The Room at the Bottom of the Stairs' tells of an impossible, ultimately tragic love affair set in the embattled city of Berlin during the latter stages of the war.