Wraith: Welcome to Christmasland is a comic book miniseries written by Joe Hill, illustrated by C. P. Wilson III and published by IDW Publishing. It is a prequel to Hill's 2013 novel NOS4A2 and is partially derived from material cut from the novel.
The story follows a group of unlucky adults who find themselves in Christmasland, where they are terrorized by Charlie Manx and his 'children'.

Charlie Manx, the ghoulish driver of an old 1938 Rolls-Royce Wraith who takes children to the holiday hell of Christmasland in Joe Hill’s novel NOS4A2 makes his comic-book debut tomorrow in the first issue of Hill’s IDW miniseries Wraith: Welcome to Christmasland.
“Wraith tells a story about how some escaped prisoners wound up coming to Christmasland with Charlie Manx and what happened to them once they got trapped there,” says Hill, the Locke & Key creator who’s working on the series with artist C.P. Wilson III.
The first issue delves into Manx’s own horror story of a childhood before he became a vampiric menace who uses human souls to gas up his ride.
The series on the whole was Hill’s way of spending more time in Christmasland, the amusement park haunted by monstrous kids only seen a little in NOS4A2, which is now out in paperback. 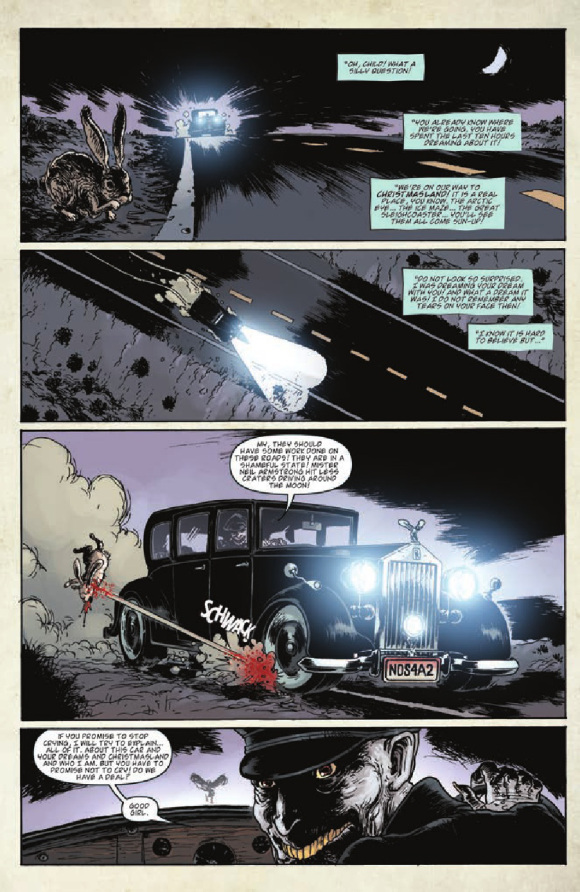 'The End.' A door claps softly shut. A key scrapes in a last rusted lock. It ends here: the story of the Locke children and their desperate, tragic battle with the monster set on destroying them... the past. Join Gabriel Rodriguez and Joe Hill for the final chapter of Locke & Key.

'The first thumbprint arrived in the mail.' As Mal struggles to find out who's threatening her, the list of suspects continues to grow. Have the demons from her past really traveled all the way from Iraq to get their revenge, or is it someone much closer to home?

The list of suspects swells as Mal comes to terms with her past sins. Someone in her life is looking for revenge, and they're determined to get it. Find out who, in the chilling conclusion of Joe Hill's Thumbprint.

Wraith: Welcome to Christmasland #1 (of 5)
www.amazon.com

Wraith: Welcome to Christmasland is a comic book miniseries written by Joe Hill, illustrated by C. P. Wilson III and published by IDW Publishing. It is a prequel to Hill's 2013 novel NOS4A2 and is partially derived from material cut from the novel. The story follows a group of unlucky adults who find themselves in Christmasland, where they are terrorized by Charlie Manx and his 'children'.

Joe Hill's New York Times Bestselling novel, NOS4A2, introduced readers to the terrifying funhouse world of Christmasland, and the mad man who rules there: Charlie Talent Manx III. Now, in an original new comic miniseries, Hill throws wide the candy cane gates to tell a standalone story that is at once both accessible to new readers, and sure to delight fans of the book.

Wraith: Welcome to Christmasland #2 (of 5)
www.amazon.com

Desperate men will do desperate things. It was desperation that drove Chess Llewelyn to commit a crime that bought him seven years hard time... and it's desperation of another sort that drives the King Geek, Denis Sikes, to attempt a jailbreak of staggering ingenuity and violence. Chess will find himself hauled along for the ride: a ride so terrifying it could almost be one of the attractions in scenic Christmasland!

Wraith: Welcome to Christmasland #3 (of 5)
www.amazon.com

Three escaped convicts are looking for a set of wheels that can carry them to freedom. Charlie Manx has just the ride they need... but when they get to Christmasland, they'll wish they went to prison instead. Ten years of hard time looks pretty easy compared to 24 hours in a frozen graveyard disguised as the world's coldest, cruelest amusement park.

Saunders made his fortune as a hatchet man for hire and has come to England to do what he does best: chop down the little guys to clear the way for a global firm. But his train north just made an unexpected stop to let on some passengers straight out of the worst kind of fairy tale. Now he's up to his ankles in blood and finding out just what it really means to live in a dog-eat-dog world...

Wraith: Welcome to Christmasland #4 (of 5)
www.amazon.com

The calliope plays a lunatic waltz; the rides run at breakneck speeds; Christmasland is open for business and Charlie's children are closing in on Chess Llewelyn and Agnes Claiborne. Dark magic waits around every corner... but just maybe Chess has a trick of his own up his sleeve.

Wraith: Welcome to Christmasland #5 (of 5)
www.amazon.com

The Rules of the Game: The hunt has begun: Christmasland's prisoners are falling one by one, slaughtered among the park's dark amusements. The only way out has vanished, darkness is coming, and Charlie Manx's children are everywhere. Chess Llewellyn and Agnes Claiborne have one hope-to figure out the rules of this new, impossible landscape and find a loophole that will allow them to fly away.


On April 29, 2014 author Joe Hill will release his short story, “By The Silver Water of Lake Champlain” on eBook.
The 100 page story originally appeared in the book, “Shadow Show: All-New Stories in Celebration of Ray Bradbury” in 2012 and is described as a tale of childhood imagination, squabbling, parental disinterest and dinosaurs that manages to be science fiction, fantasy and reality tale all at the same time.


I've read Joe Hill's forthcoming novel, THE FIREMAN (I happen to know the author). It's mind-blowingly good. Save your nickels & dimes kids.